From Rags to (so much more than) Riches | Toronto Pet Photographer

They named her Rags, short for Ragamuffin. The name fit. Found running down a main road by a kindly police officer, this snippet of a dog shivering from the cold was brought to the closest shelter. A senior dog, deaf, blind and not yet spayed, she had been hungry too long. And had too many puppies. As a result, her skin was many sizes too large for the small body she carried on her slight frame. Her coat was a clear witness to the neglect she had experienced.

The now permanently closed shelter had an arrangement with the local college – they “placed” animals with the Veterinary Technician Program with the hopes of them becoming socialized.  It was a good arrangement.  After all, the students need practice at handling animals, and a socialized animal has a much better chance of adoption than one that is not.  In this way, a small, delicate Shih-Poo named Rags arrived at the college in a sad state.  She was almost immediately shaved and spayed and met the students.

One of those students was my sister.

From the moment she met Rags, my sister held her and with words she could not hear, but affection she could feel, let her know that someone in the world cared.  At the end of the semester when the time came for Rags to return to the shelter, my sister knew that that simply could not happen.  Given her age and her medical condition, her chances of adoption were almost non-existent.  She would only have shelter life to look forward to.

And so Rags was brought home.  We are a close family, which means that this girl has become a part of all of our lives.  It has been amazing to see the indomitable spirit of such a little dog.  While she spent her first few days only sleeping and eating, by the third day, she wagged her tail for the first time.  A few days later, she found her voice.

Today marks an anniversary.  Rags has been with us for one whole year.  She now shares her life with two other Shih Tzus, and although deaf and blind, she has quickly learned the routine.  They have accepted her into the family and surprisingly, she is able to interact with them despite her limited senses.  More importantly, she has not let her past taint her ability to accept the love she is receiving now and will receive on into the future.

Fortunately, we will never know all the details of her sad life before she came to us.  That is a story that only Rags could relate and she is not telling.  But one thing is clear:  the Rags who arrived at the shelter just over a year ago, no longer exists.  Fitting for a dog that has come so far, and whose life has changed so much, her name has changed.  World…please meet Muffin.  Muffy.  The sweetest dog in the world.  The little dog with an amazing heart.  The little dog who has found her forever home. 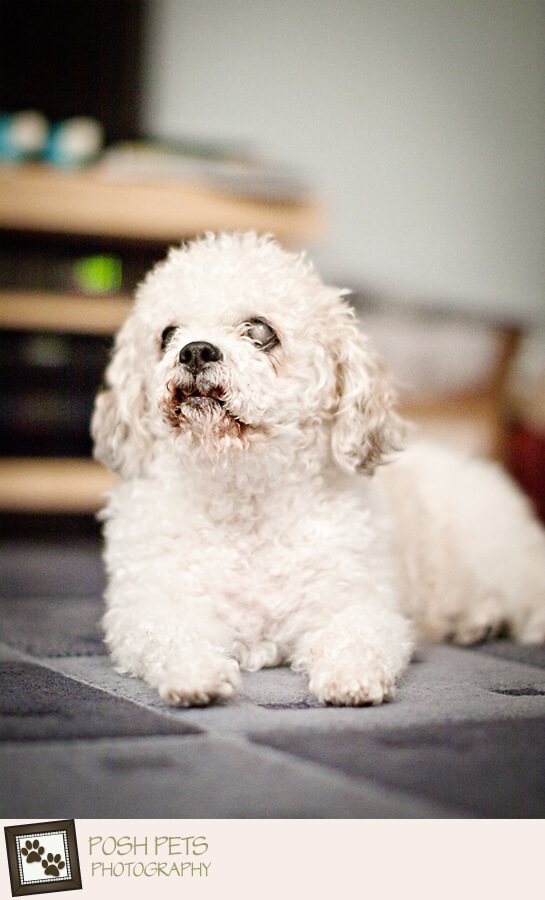 EDIT:  We said good-bye to Muffin at 3:00 a.m. on Tuesday, March 19, 2013. My sister had asked her for 2 years when she adopted her and that is what Muffy gave us. She was wonderful, amazing and incredible and is sorely missed. While her body eventually failed her, her heart loved until the end. Go gently into that good night, Muffy.